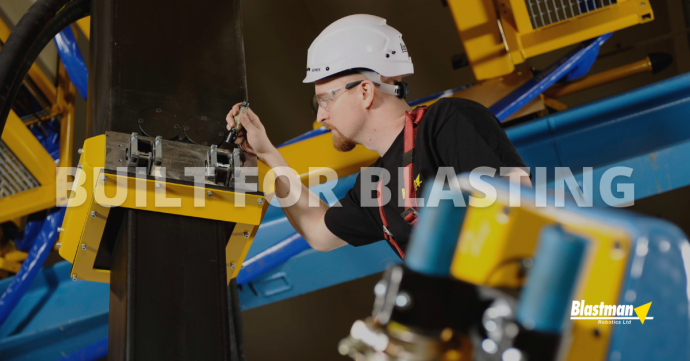 The original ways robots have proven their efficiency over other blast cleaning methods haven’t changed a lot over the decades. On the other hand, this just goes to show they stand the test of time. Larger nozzles and bigger hoses enable larger jet streams and bigger amounts of blast material. This principle doesn’t change. However, the benefits of robotic blasting don’t end there.

Within blast cleaning robotics there has been, and is, continuous development. The level of programming and the proficiency of maintenance have advanced and in turn improved the already impressive reliability and lifetime of the equipment. Simply put, the all-in-all efficiency of the process has improved.

In this article we take a deeper look into the different aspects that make the efficiency of automated robotic sandblasting unrivaled.

To this day there exists a certain feel of magic and mysticism to robots and it is common to compare their abilities to those of us humans. When industrial robots are in question, the comparison is typically induced with a slight fear of humans getting gradually replaced.

But if we are truly fair, throughout our existence we humans have invented and refined tools in the effort of reducing the need for manual labor. When it all comes down to it, even sophisticated robots are only tools and sometimes handing over a specific job to them is not only smart but borderline necessary. In this sense a blasting robot is a friend, not a foe.

Manual blast cleaners have to endure extremely harsh and exhausting conditions while robots can operate tirelessly without breaks. Additionally a robot needs a relatively small space in comparison to a manual worker. In fact it is operable in such a narrow gap it wouldn’t be ergonomically sensible for a human. If the object necessitates blasting from high up, the robots can be fitted with telescopes that make the erecting of scaffolding or ladders unnecessary. Automated robotic blasting process is always prepared in a way that enables cleaning throughout the workpiece.

Utilizing robotics tremendously improves occupational safety but affects the human resources aspect otherwise as well. Manual blast workers stay in their profession for a maximum of two years before seeking other jobs. The ones that have been given the opportunity to shift to operating robotic blasting, on the other hand, have continued for 10 to 20 years. Shifting to automation reduces long sick leaves and the need for training new workforce as more long-lasting professionals stay in the picture. Difficulty in finding young workforce for manual blasting is in fact a global trend and it’s no wonder since there is an abundance of more pleasant work. One of them being none other than abrasive blasting with robotics.

Optimization is efficiency in blast cleaning

Second only to the humane point of view, the most important reason to replace manual blasting with automation is of course productivity. When industrial processes are scrutinized it all inevitably comes down to numbers.

While human laborers can only operate one blasting nozzle at a time, robots can be fitted with two each. Additionally robots have no trouble handling 19 millimeter nozzles at a pressure of 10 bar while the respective specifications need to be limited to 8 mm and 5 to 6 bars for humans. This difference in pressure affects the abrasive velocity, which in turn affects process efficiency. With high 10 bar pressures, the robot accelerates the abrasive to 200 m/s, whereas manual blasters or other blast cleaning methods fall far short of this.

While a robot can blast 200 square meters per hour, the typical efficiency of a manual blast operator is 10 m² per hour. It is of course possible to manually blast more than that, but the higher the pace gets the more it begs the question whether the cleaning quality is sufficient. With a robot there is no question, as it always does what it’s programmed to do.

The higher the pressure the more powerful the blast can obviously be. However, the maximum pressure is not always necessary, not to mention optimal. In fact, the efficiency of robots can also be perceived through their ability to operate accurately and consistently with a lower pressure as well. E.g. for a train car made of aluminum, 10 bars is too much. Yet the robots handle the same car, which takes four people a day to process, in 20 to 25 minutes.

Optimization also takes into account the number of operators and their ability to perform. Manual laborers often need to pause their work to switch positions and to tug and pull the blasting hoses as they go. The more workers have to move the less efficient they are. Meanwhile, robots move in fluid and continuous movements and have brackets to move the hoses with them. A reasonable number of workers inside the same blasting chamber is usually 2 to 4 people.

Some work pieces are repair jobs that are coated with, for example old paint. This causes more work phases, and the more phases there are with a certain piece, the more time robots win per square meter.

The efficiency of robotics can be underlined not only by comparing it to manual blasting but to another automatic solution called wheel blasting. This method is based on a high-velocity spinwheel that propels abrasives to a certain direction. It is usually categorized as airless blasting since it doesn’t use a propellant such as compressed air.

To be completely cleaned, sloping and curved shapes as well as different notches and indents – spots that form shadows – need to be blasted from many different angles. Even though a spin wheel can propel a huge amount of abrasives, its blast doesn’t reach around corners. If the geometry of the workable object is complicated, a large amount of abrasive, accelerated to high speeds, simply misses its mark and hits the walls of the blast booth. A normal Blastman Robotics Blast robot has 8 axles which enable nozzles to be positioned extremely precisely to desired spots.

There are also limitations to materials as blasting wheels can only use buckshot-type abrasive. In air-based blasting it is possible to use any kind of grain, enabling also the use of extremely hard and gritty materials that would break a blasting wheel through mechanical wear.

Robots are relatively maintenance-free in comparison to a wheel blast machine. With robots the most common maintenance procedure is hose replacement which takes approximately 5 minutes. This means that not only is a robot practically always operable, it’s also back in action astoundingly fast.

Automated robotic sandblasting follows a program that not only ensures that the robots know what to do, but enables many advantages. Once the program is compiled, workpieces can be processed with it for years. The program is prepared on a computer in a 3D environment so that it doesn’t consume production time. This way, as the object arrives for its surface treatment, everything is ready.

Programming includes a simulation feature that demonstrates how the spray is going to hit surfaces as well as gives out a cycle time for the blasting process. This way it’s easy to optimize all the necessary specifications and plan a desired number of processed workpieces in a certain time beforehand.

In manual blasting the abrasive is loaded in a hopper or a pot that is blasted empty and then needs to be refilled. Blasting robot, on the other hand, uses a Blastman blast pot with automatic abrasive refill. This way a program can run continuously for, for example, 20 hours until it’s finished and the blast pot never runs out of abrasives. With large workpieces and long processes, continuity can significantly save time.

As a cherry on top, with Blastman’s robotics it is possible to decide whether the system propels abrasive or only air, and even determine this beforehand in the programming phase. By shutting down the stream of abrasive it’s possible to clean the object from residual abrasive and dust.

The thing that surprises many people, is that the robotics used in Blastman’s solutions are its own. Blastman hasn’t utilized any common industrial robots but has instead designed their robotics specifically for abrasive blasting. Although it’s an easy assumption that such finely tuned equipment would be prone to give in, they are in fact bafflingly durable.

The robot’s arm which is closest to the blast’s rebound lasts for over 10 years. To be fair, from the maintenance point of view it is more useful to compare the lifetime of blasting equipment through operating hours which in robotics is in the thousands. Still, it says something that there are Blastman’s robots out there that have been in steady use for 25 years.

Sometimes potential customers are under the impression robotic solutions wouldn’t suit their long processes. As determined earlier, the bigger or more complicated the object the smarter it is to utilize robotics. As all the different benefits of automated robotic blasting are put together, the longer a blasting process lasts the more benefits they reap.

Every once and a while the suitability of robots for processes where workpieces vary poses a concern. No need, since the offline programming and its easiness enable flexible processing of small series as well.

It is also a natural assumption that operating a sophisticated system incorporating robotics would require comprehensive know-how. Everything has been designed so that it can be used without an engineering degree. It has even been stated that Blastman’s interface can be operated if one can use Playstation. Accessibility and user-friendliness are in naturala demand as people operating the equipment have in the same time gotten used to it with their everyday appliances. This is something that has been taken into account and consciously improved.

The even more efficient future of blast cleaning

The first delivery of Blastman’s own programming software took place in the fall of 2021. Until that point the company operated with a third party. Tailoring software for Blastman’s own robots has made the operation of them even smoother and more user-friendly.

As mentioned in the beginning, the main principle of robotic blasting has stayed the same but this doesn’t prevent the process from being developed further around it. In the quest of making robotic blasting even more efficient one answer is reducing working hours with automatic programming and machine vision.

Robots don’t yet know where the workable object is and thus have to rely on the program. Machine vision can be used to identify certain points of the object, determine its accurate position and, if necessary, shift the program to the correct position. This is especially useful if the placement of the workpiece has to be measured by millimeters or it is too large to be moved around during the process.

The placement could of course still be determined manually with a laser but as is the case with so many other things, automation could handle the same thing instantly, as well as reduce the risk of useless blasting and the need to renew work. Added accuracy equals added quality.

While blasting robots are highly efficient and durable, even they need maintenance. Proactivity – for example an automatic detection of an incipient hose breakage – can improve efficiency by providing the opportunity to schedule maintenance in advance to a time where production doesn’t happen to be running. This way it won’t interrupt a process.

Other areas to which automation could be extended are, for example, the intake and expulsion of the workpiece and the monitoring of the abrasive mix. As the blasting material hits the processed surface it disintegrates and turns into dust. One way to improve the efficiency of the process is to monitor the dissolving material and determine whether the process is run with an optimal abrasive mix.

Automation in overall monitoring of the space and process can provide valuable data that can benefit the utilization rate and lifetime of all the equipment needed in a blast.

Blastman Robotics is not only a blast cleaning company but a producer and manufacturer of automated solutions for the industry of abrasive blasting.