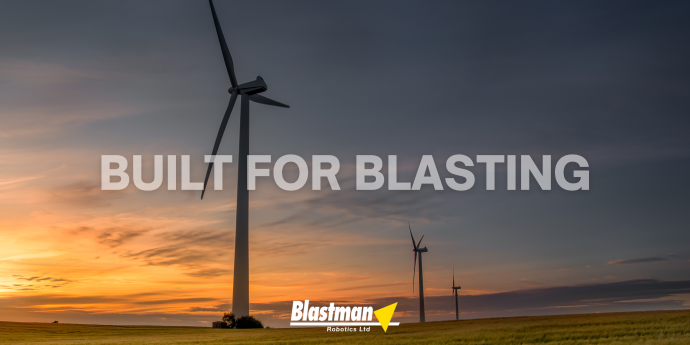 The first abrasive blasting solutions for the wind power sector supplied by Blastman Robotics were installed in the early 2000s. From then on, the company’s blasting robots have been delivered to the industry regularly. However, from the perspective of a blasting robot manufacturer and service provider, the world situation has caused two distinct increases in wind power-related commissions. EU investments and support mechanisms regarding green values played a part first around 2009-10 and during recent years the same kind of development has led to wind power trending once more.

As Blastman’s fully automated robotic blast cleaning solution has been proven to be the most efficient and reliable method for surface treatment in the windmill manufacturing industry, it’s no wonder there has been an increase in implementation projects globally.

Wind power plants consist of numerous parts that need to be blasted with abrasive. The reason for this is the need for welding seams and exterior surface areas where the correct cleanliness and roughness ensure a strong and durable paint film for corrosion protection.

What kind of solutions does Blastman provide for the industry? Read along.

Furthermore, different areas of a windmill tower require different blast quality as certain areas are metalized. The quality difference required can be easily programmed into the Blastman robot, so all areas are ready for further steps in the surface treatment process.

During their manufacturing process, both onshore and offshore wind power plants are finished with a long-lasting and mechanically strong paint surface. This is done for two distinct reasons. First of all, the paint protects the windmills as they are exposed to varying and harsh elements. Secondly, it helps to keep the large towers, which play a great part in their scenery, looking clean.

For the coating to last, there are strict quality requirements for the preparation of the windmill exterior surfaces. Blastman’s got this covered, as its robotic blast cleaning solution provides a constant high-quality surface preparation grade and the correct roughness for the entire workpiece.

In wind turbine sandblasting, or abrasive blasting to be more precise, the workpieces are of varying sizes and typically relatively large. As the wind turbine blades are made of fiberglass and are not blast-cleaned, the most recognizable windmill part gets blasted in the tower. At 30-50 meters long they have a huge surface area which naturally calls for an efficient solution.
Blastman B12S robot G4

Regardless of their length, the towers are blasted in indoor facilities. Towers are typically transported on rails on top of roller beds. For this Blastman offers a wall-mounted robot that traverses on rails and blast cleans the entire exterior, including flanges. Blastman also provides an external encoder to integrate the existing roller beds as an axis of the robot. This way customers don't need to change their existing equipment to match robot needs, rather Blastman makes use of existing equipment available. The solution is very simple compared to some of the other Blastman robots but extremely efficient.

Blastman’s wind power customers have rarely constructed the blasting spaces with robots in mind. This speaks volumes of the greatest part of the method: it is very easy to retrofit into a pre-existing blast booth to increase the level of automation of the blasting process. This is further supported by the easy attachment of a sensor to the customer’s rotator. As the doors close the robot takes the space in charge.

Blastman supplies blast cleaning robots and services to the manufacturers of numerous windmill parts. In addition to towers also rotor hubs, generator components, and generator housings are blasted with the company’s robots every day.

When windmills are erected offshore there are basically two kinds of foundational methods. Traditionally the towers have been rooted into the seabed with a so-called monopile or a tripod-type of structure. However, nowadays also floating structures that are anchored in the seabed with wires, are implemented. In addition to the actual mills, these floating solutions entail tremendous surface areas.

Another dimensional aspect has to do with the fact that just as wind power in itself is a trend, within the field also megawatts are trending. What this means, is that basically everything is getting bigger. A higher energy production requirement means larger rotor blades and hubs, which in turn mean a larger gearbox and generator. As they naturally require larger housing, the result must also include a taller tower with a larger diameter. While in 2007 only a few operators were capable of manufacturing towers with a diameter of 6 meters, nowadays the norm is closer to 10 and there are diameters up to 14 meters.

In the blasting of wind turbine surfaces, Blastman hasn’t come across problems that wouldn’t have allowed for meeting quality requirements. From the robots’ point of view, the size of the windmill parts is not any kind of an issue and is ultimately only a question of the number of robots and the available space. Large workpieces are Blastman’s business.

Instead, the challenge lies in the facilities the windmill manufacturers have traditionally used and whether the new pieces fit inside old buildings. The size of especially the floating windmill solutions is getting so big and includes so many large studs and other protrusions, that traditional Blastman solutions won’t be enough. For this reason, Blastman has developed solutions that can handle workpieces with a diameter of 30 meters and a height of over 10 meters.

Of the blast cleaning methods that are still used instead of robots, manual blasting is the most common. The number of workers needed for large workpieces such as a windmill tower is quite extensive, and naturally, the harsh environment of a blasting chamber is more dangerous the more workers are involved.  Another method utilizes a blast wheel attached to the side of the windmill tower. The biggest problem of this method is that it uses shot as the abrasive material instead of grit, leaving the surface dented and preventing materials used in metallization from attaching to it.

In addition to occupational hazards and a surface that leaves a lot to be desired, methods other than automated robotic abrasive blasting require large facilities and are not nearly as efficient.

While manual laborers go through 15 square meters per hour a single robot is able to blast 200 square meters per hour. Thus, the efficiency of the method is more than 10 times higher when compared to manual labor. Even though Blastman is the world’s leading provider of automated robotic blast cleaning solutions, and supplies highly efficient equipment to all its customers, an increase in efficiency of this magnitude is not achieved in many product groups.

As a very small and light wall-mounted robot is able to replace a large number of workers, it has a truly great return on investment value. However, as is the case with all its industry-specific solutions, Blastman’s development is ongoing for the benefit of even more efficient automated blasting processes in the wind power industry. The next step for Blastman is to automate the interior blasting of windmill towers to provide a truly man-free environment in the industry.
Blastman B12S robot G4