BACKGROUND
Eisengiesserei Torgelow GmbH is one of the biggest hand-molding gray cast iron and ductile iron foundries in Europe. With modern casting and production technology, the company can effectively produce heavy and complex castings. Having heard about Blastman technology the company also decided to upgrade its manual blasting to state of art robot blasting.

OBJECTIVES
The target was to robotize their manual blast room since blasting large castings manually is ineffective. There was a need to use a robot by programs and additionally manually by joysticks for touch-up blasting. Touch-up blasting is needed since possible casting failures are hidden and can be found after a robot blasting process. The old transport wagon was planned to be retained.

The EGT is one of the largest European hand
molding foundries with a capacity of 8,000 t /
month. It supplies finished components made of
gray and ductile iron with a blank weight up to
115 t and provides other services such as
modeling, simulation creation, and engineering.

SOLUTION
The blast room was robotized by one Blastman B20S robot equipped with a camera system and a control room for touch-up blasting. The blast room was equipped with robot rails. The old recycling and ventilation system was integrated for robot operations and a new Blastman double chamber blast pot for continuous operations was included in the scope. The old transport wagon was integrated into the system. 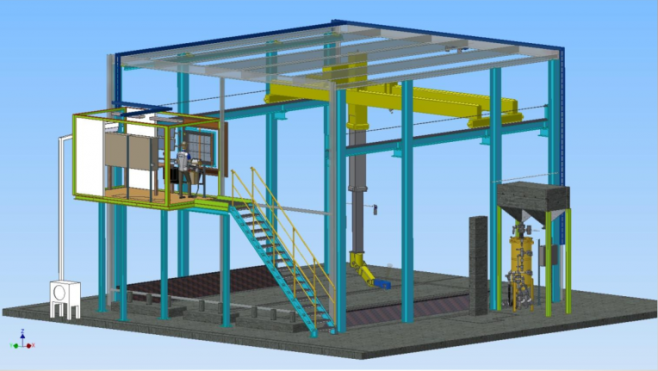 RESULTS
The robotized blast room works perfectly both in automatic and manual operations. The manual touch-up blasting is easy due to excellent visibility from the control room located well above the floor level and a supporting camera system to check the cleaning result in detail from a short distance.

Built to blast - How to make robots last for decades?