Blastman Robotics Ltd has a proven track record of successfully delivering complete blasting solutions to customers around the world. A few years ago, we discovered a trend in existing blast rooms, which suggested a need for a smaller and more flexible robot model. Many existing blast chambers are restricted by height and width because they are designed for manual blasting. This gave the idea to build a more compact and flexible robot model. By applying innovative engineering and design, Blastman is now able to provide a more suitable robotic solution for smaller and more restricted blast rooms. 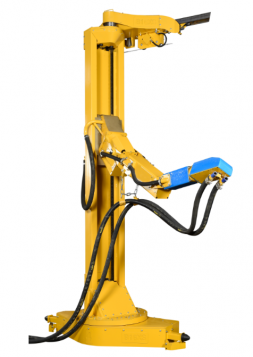 The slim frame of the B16XS robot allows for better movement in smaller workspaces and more flexibility with complex workpieces. The small and flexible design of the B16XS makes it easy to retrofit into existing blast chambers. The B16XS robot moves in the longitudinal direction of the blast room on rails, which are fixed to the floor. The hoist carriage moves the robot arm vertically on the mainframe. The robot arm is used to direct and move the blasting nozzles. The Blastman B16XS robot typically consists of seven (7) axes similarly as the B16S robot.

Blastman B16XS robot provides an efficient and flexible blast cleaning solution for many different industries. The design of the robot allows the use of an overhead conveyor as a means of transporting the workpiece into the blast room. A single B16XS robot can also work in tandem with a turntable. Blastman B16XS is the perfect choice for any companies that are restricted by space in their blast room and looking for a solution to automate their blasting process. 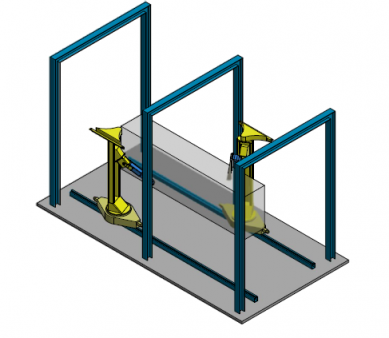 Situations where the traditional gantry-type robot cannot be used due to restrictions in the blast room height or workpiece transportation, the B16XS is a perfect choice. The B16XS designed to move on rails, which are built on the floor unlike in the gantry models. Because the robot rails are on the floor, it makes installation and maintenance work considerably easier and the whole solution much lighter. Also, one significant benefit is the location of electrical panels. With the B16XS, electrical panels are located outside the blast room. This design allows for most of the electrical equipment to be outside of the dusty blast cleaning environment. Also, running diagnostics for the robot is simpler, since the electrical panels are located at a more ergonomic space. Even though the B16XS robot model is smaller in size than previous robot models, it still has the capability to produce the same amount of power with 19mm nozzles and up to 10 bars of pressure.  The B16XS is simply a compact, light, flexible and very cost-efficient investment for any blast cleaning process.

By applying this new innovative robot model to a blast cleaning process, companies can be more effective and productive than in traditional manual blasting process. Also, the B16XS provides a constant high quality for all workpieces put through the process. Safety is also an extremely important factor in the harsh environment of blasting. The automated blasting process removes manual labor from the blasting process and greatly improves workplace safety. Automating the process also gives an opportunity to focus manpower on other tasks.