Torzhok Car Building Plant is a Russian manufacturer of railway cars located in Torzhok in the Tver region. The plant produces different types of railway cars including special-purpose cars and electric trains.

In 2005, along with the reconstruction and modernization of the production facilities to increase energy efficiency and production volume of up to 250 cars per year, a Blastman robotic blasting chamber was put into operation as part of the painting workshop.

The Blastman blasting chamber consists of the following equipment:

Putting the robotic blasting chamber into operation has allowed achieving the required capacity and the car surface preparation quality before painting.

After 2014 the plant situation was unstable, there was even a production shutdown for a couple of years. The situation changed in 2019 when the plant became part of the Tver Car Building Plant (Transmashholding).

In 2019 the specialists of the Tver Car Building Plant contacted Blastman and asked the company to carry out a technical audit of the blasting chamber equipment in order to restore its operability after many years of the equipment’s standing idle without its preservation.

Inspection and testing of the equipment carried out by Blastman resulted in a trial start-up of the blasting robot and other chamber equipment. The possibility of restoring the chamber operation was confirmed.

However, it was required to repair and replace some components. After a preliminary estimation of the repair costs, the customer decided to restore the robotic blasting chamber.

In September 2020 after the equipment restoration, the Blastman robotic blasting chamber was started up and the first coaches were blasted. At the same time, car assembly and production began at the plant.

In February 2021, on the initiative of the customer and with the support of Blastman specialists, the equipment tests were carried out and recommendations were issued on the use of a new type of abrasive that was planned to be used for blasting cars made of carbon and stainless steel. 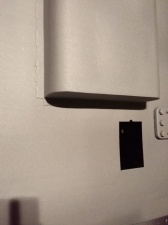 The Blastman blasting robot that blasted a carbon-steel car was successfully tested. High-performance indicators of the robot, high-quality blasting, and the required surface roughness met the requirements of the customer.